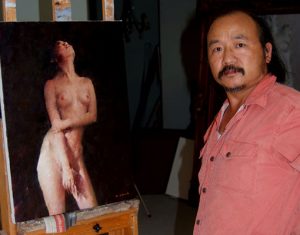 One of the exciting things about this 5-day workshop is that you usually end up a better artist at the end of the workshop. Why not?  You have spent the day doing nothing but painting, which is the best way to learn to paint. Let me suggest a few steps that will practically guarantee an improvement in your painting skills. First, come to the workshop to paint along with me, starting at the beginning and working to the end. I’ve tried to provide answers to questions you might ask, not only to know “why” but “how”. Secondly, pay attention to and study the paint-on critique that accompanies each day’s workshop. I will pinpoint on your paintings instructions to help you solve the problems virtually everyone struggles with. Students will explore the qualities that define different textures. By painting still life and models in an interesting  setting, students should feel much more confident about capturing the characteristics that distinguish copper from pewter, satin from velvet, and skin from hair.

From Day 1 to Day 5 I will be offering first-hand instruction on cultivating creativity, working from your own reference, still life and from a life model, designing a painting and more. Let’s get started!!

Day 2 – About  “Nude” painting. We will discuss the few difficult issues with nude painting. Traditional academic “Nude” painting technical – step by step illustration. In this oil painting workshop, students will paint from life, observing the model carefully, first to block in the larger forms and later to develop the secondary forms. We will concentrate on the relationships of shapes, values and colours in order to describe the special and sculptural forms we are seeing with greater depth. This will enable us to express the gesture and especially the unique character of the individual posing. 20 minutes sketch. “Lying Nude” in oil. Problem solving – more about colour mixing. Painting on critique. Assignment.

Day 4 – About Seascape – depth and distance. Demonstration. Your painting with seascape using your own reference. Problem solving. Painting on critiques. Homework.

Day 5 – The elements. The sky – clouds. Demonstration. Your painting with seascape using your own reference. Problem solving. Painting on critiques.

Models fee will be included on the requirement list.

This workshop is open to the experienced oil painter 18 Years and over.

David Chen was born in China and holds both Bachelor and Master degrees in Fine Arts. He studied a nine-year art Curriculum in seven years as a dedicated Academic. He was awarded art scholarship three times from 1981-1985. David taught Fine Arts at university for several years.  In 1988, he became the first person in China history to hold a Post Graduate Diploma in Art Education. Late in 1988, he was appointed an editor at the Peoples’ Fine Art Publishing House in Beijing where he edited several art magazines. In 1989 the French embassy in Beijing invited him to hold a solo exhibition, however, the exhibition was cancelled, and his work banned as he endured the difficult political climate in China after the events of June 1989. The BBC in Britain and Newspaper in Hong Kong reported David’s story. He later emerged as a respected artist and went on to win national and international acclaim. He was selected to participate in ‘100 Famous Chinese Artists’, a worldwide travelling exhibition in 1991. The painting “Hope” won the first prize at national art competition In Beijing 1991 and in 1992 his painting “Path to My Hometown” won the top award at the Fourth International Art Contest, Nice France. It was permanently collected by The Chinese Government. David arrived in Melbourne in early 1993. He was invited to be part of the HYDRA Art Group that was funded by the Australian Government and Art Council. Since coming to Melbourne, David has worked as a full-time artist. As well as conducting various painting workshops, he has held several exhibitions. In 1994 his three works were exhibited at the National Gallery of Victoria. In 2001 his beach painting “At Noon” was exhibited at the national museum in Canberra and selected to be hung at the United Nation Conference in New York. David has won many prizes including the Camberwell Art Show 2013 winner for “Best in Show” with his painting titled “Memory of Princess Bridge.” He also achieved the “Best in Show” in Victor Harbour 2011.  He is a member of the Australian Guild of Realist Artists judging panel. As a renowned judge, he has judged many art shows including the Camberwell Art Show 2014. David’s work is represented in Private, Corporate and Municipal Collections in Australia and overseas.