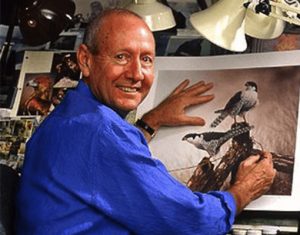 This workshop will show you the beauty and wonder of wildlife art. With the use of watercolours and other water-soluble mediums (e.g. gouache, pencil, ink, pastel, acrylic) it will enable you not only to paint feathers and fur but to paint attitude, character and photo quality about your subject.

You will position your subject, paint the surrounding habitat and give a totally realistic look to your art. The composition is the main attribute to any painting and with this achieved the technique used will excite and enthral not just the artist but the viewer.

It’s a fun course and a time to learn how to manage this medium and these wonderful natural creatures. The backgrounds and the “props” of wildlife art are important when you are painting realism.

I will also show you how to utilise airbrushing as a background technique. This will give you another dimension in art whilst having fun at the same time. You will be shown different ways of tackling this. This course will be enthralling, exciting and totally fulfilling…painting nature can be fun.

Open to all comers 18 years and over.

Paul Margocsy was born in August 1945. As a child, he loved to draw but had no formal training or direction. After school, he started window dressing at Myer Melbourne. He was called up for two years in 1966 as a conscript and served one year overseas in the army. In 1971 he went to England and spent three years travelling and working. Married in Australia in 1974, he began painting murals for children’s nurseries. In 1978 he became engrossed in wildlife art. After much research into ornithology and through self-taught efforts and experiments he started to get the hang of it.  A few years later he became a member of “The Wildlife Art Society of Australasia” and the very next year won first prize for the best painting.  Since that eventful exhibition many things began to formulate ~ Paul was included in a book launch in 1990 featuring 70 of the best living traditional artists in Australia. He also had a book published on his own paintings. Australia Post commissioned him in 1991 to do a water bird series of stamps and he was subsequently commissioned by the United Nations to paint a series of endangered species in 1994, which was released in Vienna. Paul has had solo exhibitions in London and Japan, six solo shows in America and two at the exclusive “Raffles” Hotel in Singapore, making his international career blossom.  To be chosen to exhibit at the prestigious “Leigh Yawkey Woodson Birds in Art” show in America (80 selected from over 3500 entries) was a “feather in his cap”. He was chosen two years running in 1995 and 1996.   Paul was honoured with a fellow membership to “The Wildlife Art Society of Australasia” for services to the society and wildlife art.  In 2006, he became the first Australian wildlife artist to have a solo exhibition in Hong Kong. In 2009 he released his second book “Away with the Birds”.  In 2010 he was featured in a 4-page article in the prestigious “Art in Watercolour” magazine which was released in Paris. Paul uses water, colour, and gouache with airbrush backgrounds to achieve his artwork. His love for painting, with that of his wife, son, and daughter make him a truly contented artist.