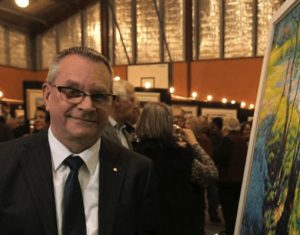 It’s your choice – five days of fun with still life and portraits in oils! Come and take advantage of the variety offered in this exciting workshop.

Still Life and Portrait subjects will be the focus of this workshop, from the quick sketch to more completed work – you have the choice. Students of any level are welcome as the challenges of these exciting subjects will inspire everyone.

Paul’s classes are well known for their relaxed and happy atmosphere, with demonstrations by the tutor each day. You may choose your own preferred subject matter, take on a different challenge each day, or work on an extended study for the 5 days – it’s up to you.

The ever-popular tonal impressionist approach will allow us to explore a diversity of fun and flexible techniques to loosen up your work; taking control of tonal values while your colour mixing problems melt away. Your paintings will come to life with light and shade and sparkling with colour.

Still Life will include a variety of colourful subjects such as flowers, fruit, fabric, glass and metallic surfaces, each presenting exciting challenges in tone, colour and many varied textures. Design and composition will be studied as we capture the play of light and the ‘feeling’ of the subject. Still life subjects will be provided and students may bring their own if they prefer.

Portraits are always exciting subjects and students will be welcome to bring their own portrait reference if desired. Perhaps a family member or friend you’ve always wanted to surprise with a portrait. Now is your chance. Paul will provide portrait subjects as well and lots of tips on the mysteries of painting the human face.

Born Melbourne 1956, Paul McDonald Smith started painting in his early teens primarily influenced by the work of renowned Australian artist Sir William Dargie C.B.E. who was to become his friend and mentor. Since then Paul has made a 40-year full-time career of painting in the tradition of tonal impressionism, working mostly in oil. Educated at Scotch College, Paul studied Fine Art at RMIT. He was awarded the Camberwell Travel Scholarship for European Study in 1986 and undertook an extensive private study under the guidance of several leading artists 1973-79. Paul has travelled widely, studying and painting in Europe on various occasions.

Paul has exhibited regularly since 1976 and has held 6 major solo exhibitions. In addition to his own painting, Paul has conducted adult painting classes and workshops since 1977 and has judged countless art competitions throughout 5 States of Australia. He founded the Balwyn Oil Painting Group in 1978 and Moonee Valley Painting Group in 1981. Both groups continue today with enthusiastic members and wait-lists, and he maintains a strong following of painters, students and collectors.

Paul served 11 years as Chairman of the Judging and Advisory Panel of the A.M.E. Bale Scholarship and Art Awards – the $50,000 scholarship being Australia’s richest award for traditional painting. He was Chairman of the TASART Judging Panel, Burnie, Tasmania in 2010 & 2016, Victor Harbor Art exhibition, South Australia in 2008, and is past Chairman of the Herald Sun Camberwell Rotary Art Exhibition Judging Panel (2002). Paul has also held various judging appointments for the Royal Art Society of NSW in Sydney, amongst many others. He is frequently invited to lecture and demonstrate painting techniques to art societies and interstate workshops.

Known for his colourful oil paintings of flowers and still-life, Paul’s work is painted directly from life and includes landscape, portrait and figure painting. His work has won many awards including the coveted ‘VAS Artist of the Year Award’ in 2001 and can be found in Public, Corporate, Regional, Institutional and Private collections throughout Australia and overseas. Named in the Queens Birthday Honours List in 2005, Paul was awarded the Medal of the Order of Australia (OAM) for services to the Visual Arts as a painter and lecturer.

In 1997 Paul was invited to membership of the prestigious Twenty Melbourne Painters Society Inc., and he served as President of that Society from 2003 to 2013 and Vice President in 2018 – the TMPS Centenary year. In 2018, TMPS members invited Paul to write a history of the Society to commemorate its 100th anniversary. The publication “Mavericks and Masters – Centenary of the Twenty Melbourne Painters Society – 1918 – 2018”   traces the story of the group and its illustrious membership, and was launched at the opening of the 100th annual exhibition in August 2018. Paul is an Honorary Life Member, Fellow, Tutor, President (1998-2003) Councillor (1992-’98), Trustee, and Editor, Norman Kaye Memorial Medal recipient (1998 & ’99) and Signatory of the Victorian Artist Society, where he has been a very active member since 1976.

Paul served 5 years as the 29th president of the Victorian Artists Society, which is one of Australia’s oldest cultural institutions (est.1870).  Elected the Society’s youngest president in 128 years, he oversaw the major restoration of the grand facade of the society’s unique purpose-built home (1890) in Albert St., East Melbourne, to original specification. Paul was chairman of the VAS Distinguished Awards Committee which he continues to advise, is a past member of the VAS Bottle Brush Club and has taught oil painting in the Society’s historic studio continuously since 1990.

Elected a Fellow of the Royal Society of Arts, London (1999), member of the Order of Australia Association (2005) he has been appointed an honorary member of several regional arts organisations including the Glen Eira Cheltenham Art Group Inc. (past president 2002-’04) where he tutored for over 40 years, the Hobson’s Bay Art Society (1984) and was awarded Life Membership of the Box Hill Art Group Inc. in 2017, in honour of 30 years’ service as a tutor.